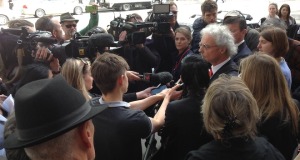 The week beginning Monday 22nd September was a week of high drama in the Murphy case!

The appeal against the original decision that the government could not be found to have engaged in misleading and deceptive conduct ran over three days before three judges.

Their decision was handed down at 10am on Monday 29th September in Anthony Murphy’s favour. The appeal judges found that the appeal must be allowed, and that the case would be remitted to a different judge of the Supreme Court for hearing.

This is important because Anthony Murphy will now return to the Supreme Court to argue for the release of the business case in order to determine whether or not the State government and the Linking Melbourne Authority engaged in misleading and deceptive conduct about the economic justification for the East West Link. It is an important case for potentially setting a standard of transparency and accountability in government.

A Directions Hearing will be held on Friday 10 October in the Supreme Court. This hearing will set out how the case will proceed and the timelines.

As part of the appeal, two injunctions were sought: to stop the contracts from being signed, and to stop the compulsory acquisitions from going ahead. The appeal court had ruled separately on these injunctions on Wednesday 24th September, and refused to grant the injunctions. This decision was subsequently appealed to the High Court, and a hearing was held at the High Court at 11.30am Monday 29th September – just an hour after the appeal decision was handed down! A lot of hard work was put into this by Anthony’s committed legal team led by Ron Merkel.

Justice Susan Crennan of the High Court gave serious consideration to the request that these injunctions be ordered in the interim, pending a hearing at the High Court set down for 17th October. The State, the Linking Melbourne Authority and the East West Connect consortium all made representations to Justice Crennan about the financial losses that would be incurred if contracts could not be signed. Ron Merkel QC for Anthony Murphy put a strong and compelling case for the public interest, and the loss to the public purse if contracts were to be signed. The judge ultimately found in the State’s favour and declined to grant the injunctions.

Anthony’s legal team are now considering their options in relation to the High Court.

You will no doubt be aware that within an hour of the High Court decision on Monday 29th September, contracts were signed with the East West Connect consortium. It remains to be seen whether these contracts were made validly, as the cities of Moreland and Yarra have challenged the decision by Minister Matthew Guy to approve the project. If that decision is found to have been made unlawfully, then the contracts will have no validity. That Supreme Court challenge will be heard on 15th December.

This is by no means the end of the Murphy challenge, or of the campaign. Considerable work will have to be done for the trial in the Supreme Court, and the fundraising continues, as the costs will be significant. We would like to say a huge THANK YOU to all our donors to date, who have been so generous in their support. It means so much to Anthony and the legal team to be supported by such committed and generous people.