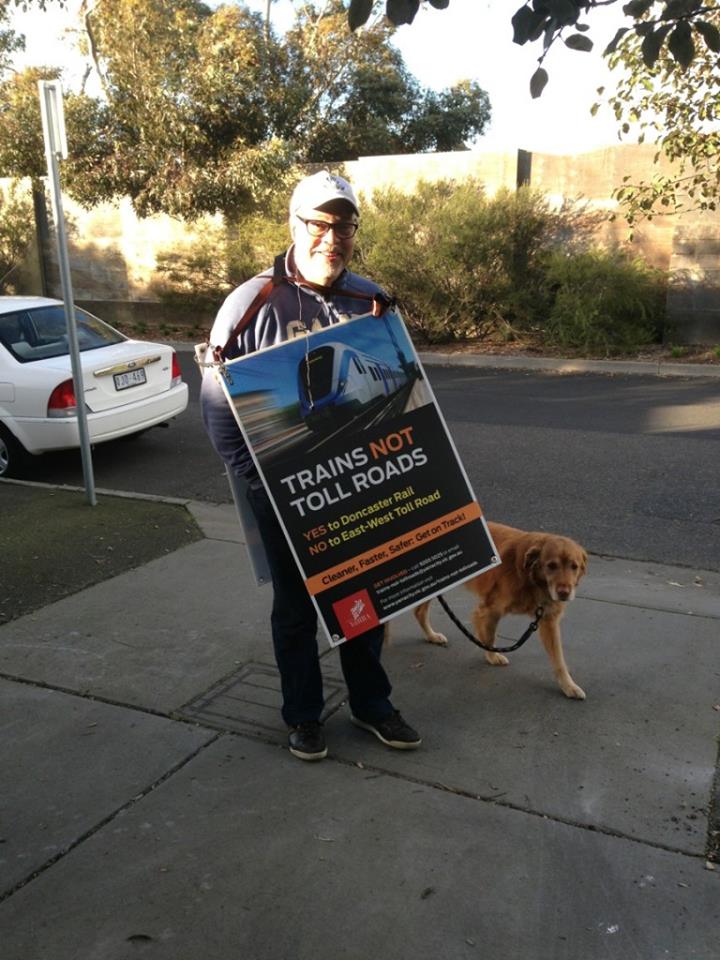 This project is like a Melanoma on our landscape and as a fellow RAT member Christine Di Muccio said on the recent 7.30 report, we have been rendered“Voiceless”.

Dr Napthine has said he will be “caring & compassionate” of the people affected by the project.

But he has made it clear that this will only extend to people whose property is to be compulsorily acquired, other than the recent precedent set by the purchase of the Evo Development.

It would be nice to hear his true unadulterated and some would say suspect reasoning for bulldozing their way across the Victorian electorate with his ill planned and heavily flawed East West Tunnel ‘Pipe Dream’.

Recently comments by Dr Napthine on Tom Elliot’s 3AW afternoon program when questioned on the EWT matter was quite weak and hollow, and even Tom who I regard as very lucid, astute and historically conservative, but compassionate at heart, doubted his sincerity on this matter as Dr Napthine pointed to a 10 page Hyperbole/propaganda document on the Linking Melbourne Authority website.

Our issues below are no doubt shared by all those that abut or are very close to the disastrous East West Tunnel;

I also congratulated and am genuinely pleased for the Evo Developers and property investors being rightly afforded a choice in resolving their financial plight; In effect a ‘Get out of Jail card’, I am although extremely disappointed that other effected parties are not been dealt with ‘fairly and with respect’ as the State government likes to espouse, particularly those that are in a similar situation i.e. residents/business that surround or face onto Onramps like the one starting in Bendigo St and sweeping across Hoddle St along Alexandra Pde East.

The Evo project people like others who directly face onto the new project where not slated for acquisition and therefore did not fall under current Land acquisition laws, yet the government has chosen to resolve this issue by giving them ‘A CHOICE IN THE MATTER’ and leaving the rest of us hanging out to dry!!

I would argue that we are in a similar dire situation as the Evo investors surrounded a by a nest of future construction and Onramps caused by the about face Liberal party policy shift.  We should be afforded the same rights and choices and be treated ‘fairly and with respect’!  We would like to “get on with our lives” as Mr O’Brien stated.

Again with respect, I challenge the Transport Minister Mr Mulder, the Treasurer Michael O’Brien or the Premier Dr Napthine to visit my wife and I at our home and sanctuary.  We would love to her from them directly how our life will be ‘enhanced’. In return we will give them an honest appraisal on how they and their propaganda army LMA and crew have WILLFULLY CAPPED our life, stomped on our future dreams, critically diminished our home equity, slapped our soul etc.